The Kentucky Federation of Republican Women

Dear Members of the KFRW: 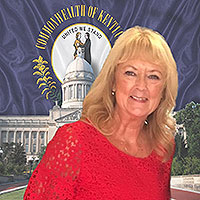 We recently celebrated President’s Day on February 15th. This federal holiday is celebrated the third Monday of every February. It is either too early or too late to ever line up with any actual presidents’ birthday however, one of my favorite people to serve as President of the United States is Ronald Reagan. President Reagan was born on January 6, 1911.

When I think of people who achieve success because of the mentors they have had, I think of the hundreds of members in the Kentucky Federation of Republican Women (KFRW) in clubs across Kentucky. Like the Republican Party, we have been on the forefront of the fight for individuals’ rights in opposition to a large, bloated government since we were founded in 1942.

Qualities I admire most of KFRW members is their ability to foster loyalty to the Republican Party and promote its principles and candidates in all elections. They are unswerving in allegiance, faithful and trustworthy.

The greatest evidence of genuine friendship is being available to help in times of distress whether by choice or forced circumstances. Now should be no different even if the results of the national elections were not as we had hoped.

Although we will not always agree with the decisions of each other, our elected officials or actions taken by people in authority, we must be reminded to respect another’s choice because they have a right to make it. Any leader who has the confidence to stand alone must also possess the courage to make tough decisions even when it is not popular.

According to our bylaws as members of the KFRW, one of our objectives is to support the Republican Party of Kentucky and work for the election of Republican nominees. We did that in November and we delivered. You should be proud of your involvement and remember what it was like when the democrats held the state house in Kentucky for almost 100 years. We now have a super majority in both houses in Frankfort because you stood united in your work for conservative candidates.

We need to lift each other up, avoid gossip, build others up and work together in humility. Please continue to give your time and your money and refuse to get sidetracked arguing over divisive matters.

The choice is yours! Can we count on you?